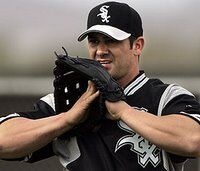 Rob Mackowiak was a member of the Pitsburg Pirates. In 2006 the Chicago White Sox aquired him as an outfielder. He remained on the team for the full season. In 2007 the White Sox traded him to the San Diego Padres towards the end of the season.

Rob Mackowiak was a fielder. He could realy play any position that the manager wanted him to play. In one of his seasons on the Pirates Rob played every position except for catcher and pitcher.

This season which is the 2008 season Rob Mackowiak plays for the Washington Nationals.

Retrieved from "https://chicagowhitesox.fandom.com/wiki/Rob_Mackowiak?oldid=3296"
Community content is available under CC-BY-SA unless otherwise noted.